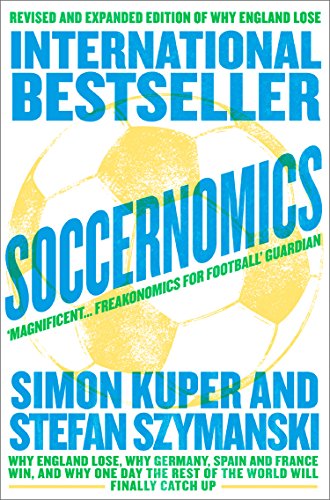 At last, football has its answer to Freakonomics, The Tipping Point and The Undercover Economist.

Why do England lose?”
“Why do Germany & Brazil Win?”
“How have Spain conquered the World?”
"Penalties - what are they good for?"
“What is the price on achieving success and the true cost of failure?”

These are questions every football fan has asked. Soccernomics (previously published as Why England Lose) answers them. Written with an economist's brain and a football writer's skill, it applies high-powered analytical tools to everyday football topics.

Soccernomics isn't in the first place about money. It's about looking at data in new ways. It's about revealing counterintuitive truths about football. It explains all manner of things about the game which newspapers just can't see. It all adds up to a new way of looking at football, beyond clichés about "The Magic of the FA Cup", "England's Shock Defeat" and "Newcastle's New South American Star".

No training in economics is needed to read Soccernomics but the reader will come out of it with a better understanding not just of football, but of how economists think and what they know.